We’ve just returned from catering a fantastic afternoon engagement party for a lovely couple who met while working as singers on a cruise ship. Now that they are back on dry land for good, Pauline and Christopher have bought a house together and on the day they moved in, Christopher proposed. The answer was a resounding yes and the very next day, Pauline called us to book us in for a Hog Roast Loxhill engagement party for approximately 25 guests.

The party would be held at the couple’s new home, in the large back garden. Pauline asked us to provide our scrumptious pigs in buns for an afternoon tea, which is our Private Party Menu 1 and includes a slow-roasted hog, with meat and crackling served in soft, floury bread rolls together with apple sauce and stuffing. It’s a simple but highly tasty option and extremely popular with our customers old and new. 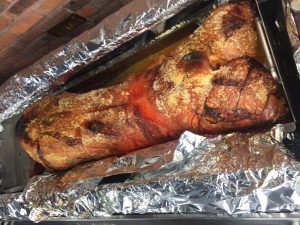 Nearer to the day of the party, Pauline called us to ask if she could squeeze in another 15 guests. This wasn’t a problem at all for our team and there would be enough food to go round already, as the couple had asked for a medium-sized beast which makes around 160 rolls in total, meaning up to four each even with the new number! Some people only have enough room for one roll but plenty of people like to have 2 or 3, so we guessed there would still be leftovers after this do.

We arrived nice and early at 7.30am to the sound of the birds singing and set up the gazebo and Hog Roast Loxhill machine. The pig would have to cook away in its own juices for a few hours, so I scored it all over, added water and salt, then turned the roasting machine on. Throughout the morning, we checked on the Hog Roast Loxhill to ensure it was cooking well, and then a little before serving time, we got the rolls and sauces ready.

By the time the guests had all arrived, the hog was resting and we were getting ready to carve into the beast and feed some hungry, excited people.